Walking with a dog just got better 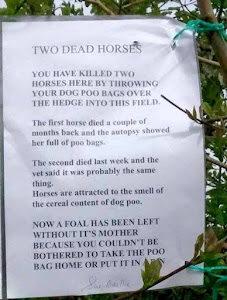 Dog poo bags hanging from trees are not anyone's idea of attractive or pleasant. It happens because carrying around a smelly dog poo bag is no fun and, even despite best intentions, human memories aren't infallible. Sadly the impact on the environment and animals such as horses is nothing short of disastrous. 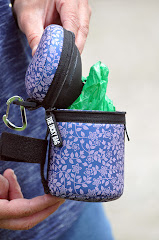 A mum in Newquay has come up with an elegant solution to this and set up a company called Duck Soup to manufacture it. It's a neat little bag made of wetsuit material that has an airtight seal so dog poo can be carried discreetly without pong until you find a bin, without any risk of leaving it behind. It includes a velcro strap and sturdy clip to attach it to a belt or lead and has a built-in dispenser for disposable plastic doggy bags. The bags come with an air freshener disc but surfers should note that Mr Zoggs Sexwax air fresheners are also a perfect fit. 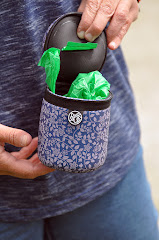 She calls it The Dicky Bag as that sounded a bit nicer than the alternative names she could think of! Dicky is a shortened form of "Richard the Third" which is cockney rhyming slang for... you can probably guess!  A ranges of sizes are available depending on the size of your pack of dogs.

It costs between £20-30 due to the high quality neoprene, stitching and seal needed to keep the air fresh for you and passers by. Whilst there are cheaper, less good products on the market, this is designed to last: some people have had them 8 years and they are still going strong and, of course, wetsuit material can be washed as many times as you like. Divide the cost by the number of years it lasts and it's very good value for money.

You can also sleep soundly at night knowing you've safeguarded the environment, don't smell of dog poo, and that you've invested in the Cornish economy as they are manufactured in Liskeard.

The video clip is from BBC Countryfile (the BBC aren't allowed to mention brand names, but I think you can guess...):


They are available with free delivery from Amazon (including speedy delivery with Amazon Prime).